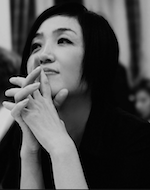 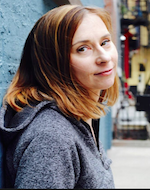 I’m a New York-based video and installation artist best known for pristine, coolly minimalist work. I’m influenced by the freedom of subject matter and portrayal of time in experimental film and video, the connections between everyday movement and modern dance, the transient nature of light art environments and the seductive power of highly aestheticized images. A colleague recently said that every piece I’ve made could be titled: ALONE, WE ARE TOGETHER. (This video, currently in post-production, explores how our dependency on machines impacts the relationships we have with one another in a complex maze of ways that are beautiful, strange, isolating and sad.) Most of my work deals with this intersection of aloneness and togetherness within the chaos of modern life. The intent of all my work is to reveal things that we see yet overlook or disregard.

In my earlier, more formal light installation work, damaged fluorescent signs minus their advertisements allow me to invoke deserted stretches of air space (NOT YET TITLED) and rotating LED light tubes help me delineate patterns of light in motion (Untitled (starsticks)). In contrast, my videos collect and refine moments from the real world. Earlier work documents nocturnes of lone streetlights and broken billboards in the wastelands of cities damaged by weather and capitalism. More recent videos explore cultural misogyny and racism.

My latest work uses re-creation and horror as modes of inquiry. I use my current strengths-a nuanced use of absurdity and play and the capacity to create streamlined imagery to tackle news stories about violence. This body of work consists of multifaceted narratives that are resonant accounts of humans and violence, highlighting power struggles surrounding race, class, gender and sexuality. With this work I intent to expand narrative possibilities for horror while stimulating renewed interest in the performance of the everyday.