Anto’s background in psychophysical theater and martial arts has lead her to interweave her exploration in experimental narrative and documentary filmmaking with performance and installation. Born in Santiago, Chile, Anto worked as an International Producer for the Santiago a Mil Festival and acted and produced for the experimental theater company Compañía Interno from 2007-2012. Anto organized and co-directed the New England Graduate Media Symposium during the years 2014 to 2016 with guest artists such as Sue Friedrich, Dalida María Benfield and Laurie Anderson. 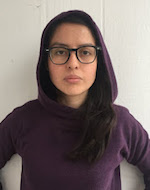